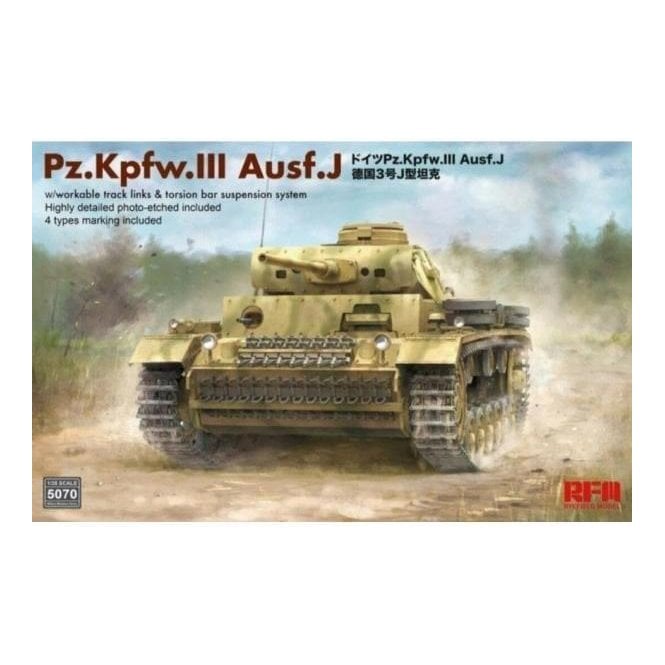 Code: RM5070
Item in Stock Item out of Stock   |   Usually dispatched within 24 hours
Want it by Thursday 18th August? Order within 14 hours, 13 minutes and choose DPD Next Day at checkout.
Loading...

The PzKpfw III (Panzerkampfwagen III) was a German medium tank from the Second World War. The first prototypes of the vehicle were made in 1936, and serial production continued in the period 1937-1943, ending with the production of about 5,800 vehicles. The tank in the E version was powered by a single Maybach HL 120 TRM engine with a capacity of 300 HP. It was armed with one 37mm KwK 35/36 cannon and two 7.92mm MG 34 machine guns. placed in the tower.

PzKpfw III was the "workhorse" of the German armored forces during World War II and one of the most intensively developed and modernized Wehrmacht tanks. Its serial production started in 1936, and many variants of this tank were created in its course. Chronologically, the first version was the A version, armed with a 37mm gun and a 230hp engine. However, already in December 1938, the E version was created, which was the first version produced in large series. It had a new, significantly more powerful engine, a completely new suspension and stronger armor in the front part of the turret and hull. Later (from December 1940) it was also armed with a more powerful 50mm cannon. In March 1940, the G version began to be produced, in which the rear hull and turret armor was reinforced. Soon after, in October 1940, the production of the H version started, which from the very beginning was armed with the 50mm KwK 38 L / 42 gun and had reinforced frontal armor. One of the most produced was the J version, which had armor up to 50 mm thick (later reinforced with aplique plates), and after the experience gained from the clashes with the T-34 and KW-1 vehicles - it was intensively rearmed for the KwK 39 L / 60 cannon. cal. 50 mm. The last development version was the N version, which was to be a support tank for armored grenadiers and was armed with a 75mm KwK 37 L / 24 short-barreled cannon. Numerous other vehicles were built on the chassis of the PzKpfw III, such as the StuG III assault gun. PzKpfw III tanks were used on almost all fronts of World War II - from the September campaign in 1939, through the campaign in France in 1940, operations Barbarossa and Typhoon in 1941, the Battle of Kursk in 1943, to the last operations of the German army against The USSR and the Western Allies in 1944-1945.