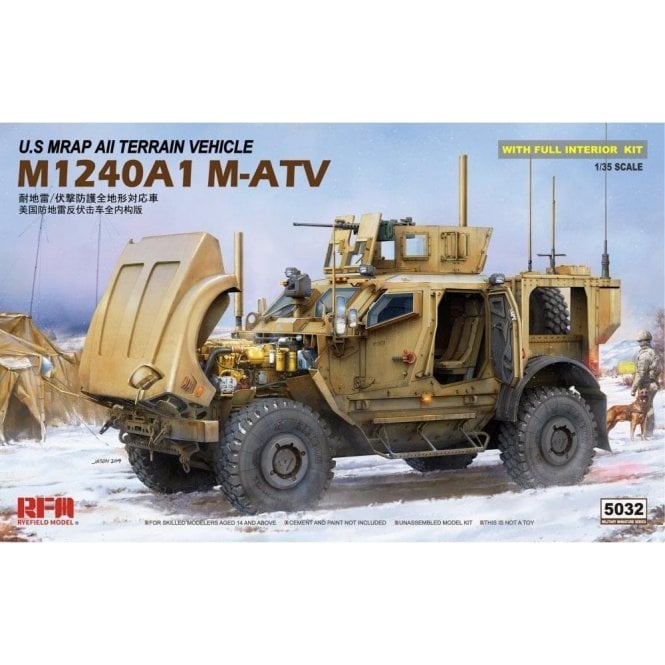 Code: RM5032
Item in Stock Item out of Stock   |   Usually dispatched within 24 hours
Want it by Wednesday 30th November? Order within 16 hours, 40 minutes and choose DPD Next Day at checkout.
Loading...

M-ATV MRAP is a modern American wheeled armored car. The vehicle is powered by a single C diesel engine aterpillar C7 with 370 hp. The vehicle can be armed with various models of weapons, including: a 7.62 mm M240 machine gun, a 12.7 mm Browning M2 machine gun or a 40 mm Mk.19 grenade launcher.

The M-ATV was developed by the Oshkosh Corporation for the 2008 US Armed Forces, which were looking for a new light all-terrain vehicle for their infantry units operating in Afghanistan. The M-ATV replaced the M1113 HMMWV vehicles in the line. The new car was developed with the highest possible mobility in mind and providing the crew with a high level of safety against the so-called fugasami. Finally, the M-ATV was developed on a modified MTVR truck chassis and is able to withstand a mine explosion or the so-called grout with a capacity of 10 kg. TNT. Its design was based on the experience gained from the operation of vehicles such as the Cougar. The vehicle is also characterized by good performance, especially the maximum speed, and a large operating range. Several variants of this vehicle were created in the course of production, for example the M-ATV Command (command car with extensive electronics and communication equipment), M-ATV Utility (transport vehicle) or M-ATV Special Process (a vehicle adapted to the needs of special forces). M-ATVs have been or are used by the armed forces of several countries, including Croatia, Portugal, Poland and Saudi Arabia.