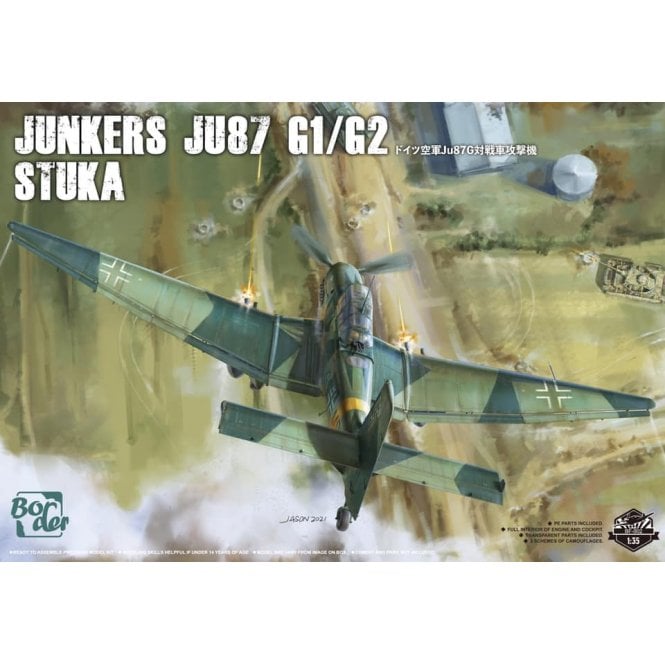 Code: BF-002
Item in Stock Item out of Stock | Usually dispatched within 24 hours
Want it by Tuesday 7th June? Order within 10 days, 6 hours, 2 minutes and choose DPD Next Day at checkout.
Loading...

This kit from Border Models is a completely new mold.

The Ju87 G-1 was an anti-tank attack aircraft developed to repel Soviet tanks; it was equipped with two Flak 18 37mm cannons under the main wing. In 1942. the plan to carry out an attack against Soviet tanks with the Stuka was realized, and in December, a prototype aircraft based on the Ju87d-1 with a cannon under the wing was built and tested. The results of this test were very satisfying, and it was confirmed that a 37mm gun could incapacitate a tank with a single shot by hitting the engine part at the rear of the tank.

Based on the D-5's fuselage, the G-2 had a 37mm cannon attached to the underside of both wings, like the G-1, and the 20mm cannon on the wings had been removed. The G-1 and G-2 were mostly used on the Eastern Front, where they proved to be very effective in attacking Soviet tank forces.

This model kit features a precise reproduction of the cockpit and engine; decals for two versions are included. A resin figure of the legendary ace pilot Hans Ulrich Rudel is also included as a bonus with the first production of this kit.