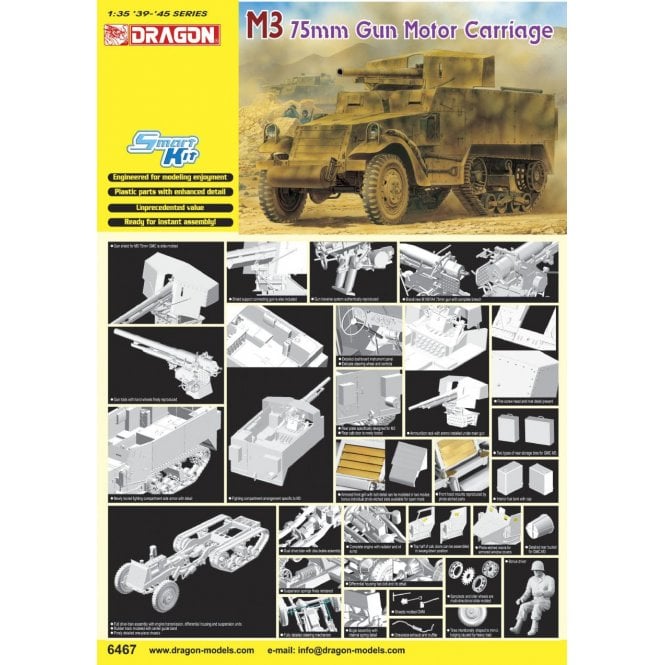 The U.S. Army made widespread use of the M2/M3 halftrack throughout WWII in all theaters of combat. This popular and versatile chassis spawned a variety of uses, one of them being a Gun Motor Carriage (GMC), a halftrack that mounted a 75mm antitank gun. As the USA witnessed the devastating power of German Blitzkrieg tactics in 1940, an urgent call went out to produce tank destroyers. The GMC M3, mounting an M1897A4 75mm gun, was one urgent solution standardized in October 1941. More than 2,200 such vehicles were produced, though only 842 saw service since the remainder were converted back to standard troop carriers. The GMC M3 saw combat with the U.S. Army in the Philippines (where some captured examples were actually used against American forces in 1944!), Tunisia and North Africa (e.g. the Battle of Kasserine Pass) and Sicily. After that, they were phased out in favor of the far more effective M10 tank destroyer, though many soldiered on with the USMC in the Pacific theater well into 1945. Other nations used them too, including Great Britain and France.

As part of its stunning M2/M3 halftrack series, Dragon is pleased to announce the GMC M3. Notably, this is the first 1/35 scale vehicle of its type to be produced in up-to-date specifications. The open-topped fighting vehicle is fully detailed, with a great number of completely new toolings in keeping with its tank destroyer thoroughbred. This means the fighting compartment has a brand new layout. The M1897A4 75mm gun is also a completely new item designed from scratch to the highest tolerances. Its gun shield is injection molded to a scale thickness matching that of the original. This 1/35 scale plastic kit from Dragon is a worthy contender to continue the M2/M3 family line, and it is ready to do battle in the Pacific, North Africa or Mediterranean.