This site uses cookies to provide and improve your shopping experience. If you want to benefit from this improved service, please opt-in. Cookies Page.
Accept Cookies
Reject All Cookies
Manage Preferences
Due to strikes on the 9th, 14th & 15th of December by Royal Mail Staff, please expect delays in dispatch and delivery of your order. We recommend that DPD is opted for where available.
Standard Delivery £5.95
Next Day Delivery Available
Pre-Order - How Does It Work? 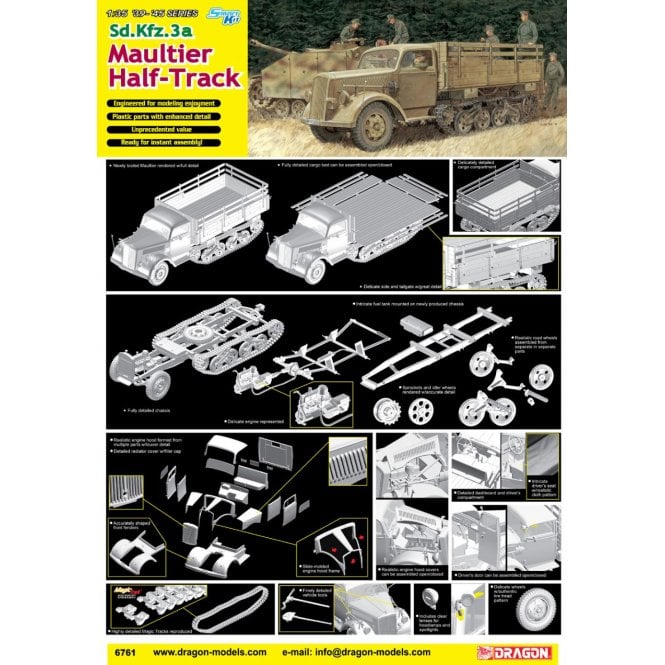 Code: D6761
Item in Stock Item out of Stock   |   Usually dispatched within 24 hours
Want it by Tuesday 13th December? Order within 2 days, 18 hours, 39 minutes and choose DPD Next Day at checkout.
Loading...

Modelers have been anticipating the arrival of a contemporary kit of the famous semi-tracked Maultier, whose name means “mule”. The origin dated from 1941 when German troops fighting on the Eastern Front quickly bogged down in the treacherously muddy conditions at the start and close of wintertime. Wheeled trucks couldn’t handle the tough conditions, so the decision was made to obtain half-tracked trucks that could negotiate the mud. The rear axles of standard cargo trucks were replaced with drive shafts connected to track assemblies from retired Panzer I light tanks. The 7.1-tonne Maultier, introduced from 1942 onwards, was largely successful although they weren’t quite as mobile as purpose-built halftracks. Load capacity was also reduced to 2 tons. Production of some 4,000 vehicles ceased in 1943 in favor of the RSO tractor.

This stunning 1/35 scale kit, fully living up to the standards expected by current-generation modelers, is based on 3-ton truck released earlier. However, it features a great many new parts such as wheels, suspension, tracks, chassis and cargo bed to ensure the vehicle is top notch in every respect. For the serious modeler wishing to depict a realistic Eastern Front winter scene, this Maultier will prove an invaluable asset. Whether accompanying one of Dragon’s many panzer kits in a frontline diorama, or negotiating thick mud or snow, this kit allows modelers to pursue their wildest imagination. The years of anticipation for a new Maultier are now being generously rewarded!