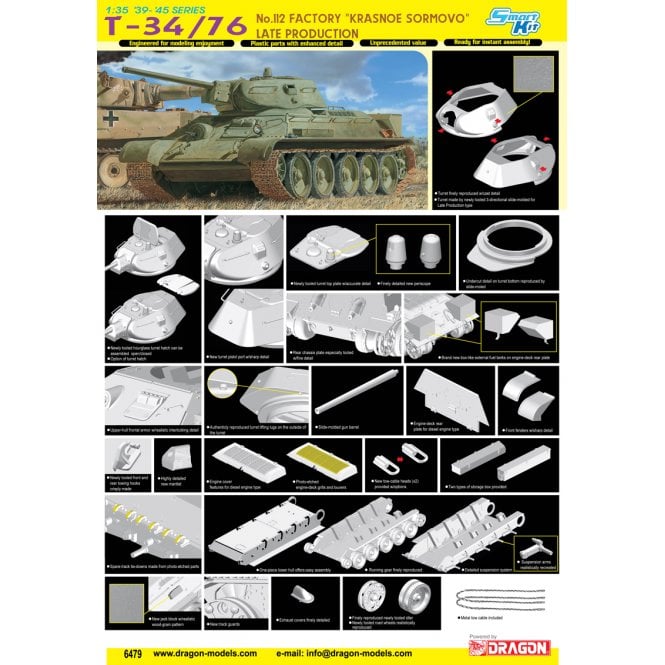 Code: D6479
Item in Stock Item out of Stock | Usually dispatched within 24 hours
Want it by Tuesday 7th June? Order within 8 days, 14 hours, 35 minutes and choose DPD Next Day at checkout.
Loading...

By the end of WWII, more than 57,000 T-34 tanks had been built by the Soviet Union, of which 34,870 were the original version mounting a 76mm gun. Initially, the leading T-34 producer was factory No. 183 in Kharkov. This production facility was then followed by Factory No. 122, also known as “Krasnoye Sormovo”, situated in the city of Gorky. Named after Andrei Zhdanov, the factory was originally a shipbuilding facility. T-34/76 tanks produced at this factory had a number of distinguishing features such as notched glacis-hull side joints and a round access hatch on the rear plate.

Dragon has released a fantastic new 1/35 scale kit of a Late Production T-34/76 tank from the Krasnoye Sormovo factory. This builds upon the success of Cyber-Hobby’s White-box Early Production kit, but it will obviously be much more accessible to the modeling public. This type of tank has never appeared on the market before, so this unique vehicle will be much sought after by modelers. Dragon’s designers conducted an immense amount of research in order to include all the important characteristics of this variant and offer them in a convenient package to modelers (e.g. left-mounted headlight, brand new 3-directional slide-molded turret, new rear-mounted fuel tanks, newly tooled ribbed wheels). The kit is also fitted with numerous handrails reminiscent of Factory No. 112 tanks, these being present for the benefit of “tankoviy desant” riders. This is an exciting kit of an important T-34/76 tank, and it is just waiting to roll into action with a full complement of tank riders!