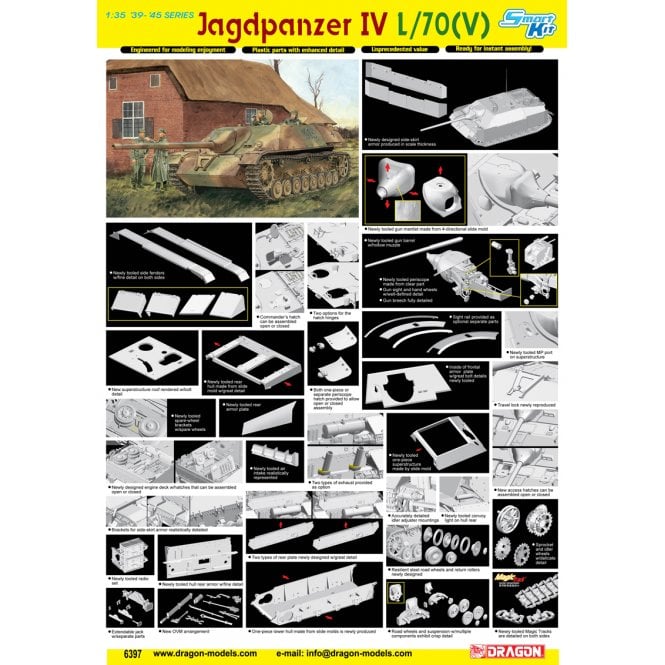 Code: D6397
Item in Stock Item out of Stock | Usually dispatched within 24 hours
Want it by Tuesday 7th June? Order within 9 days, 2 hours, 13 minutes and choose DPD Next Day at checkout.
Loading...

The Jagdpanzer concept so popular in Germany during the latter part of WWII created a tank destroyer that was cheaper and quicker to build than a regular turreted tank. The Jagdpanzer IV (Sd.Kfz.162/1) armed with a 7.5cm PaK42 L/70 gun entered production in August 1944. Production eventually reached more than 900 of this vehicle that soon came to be known as ‘Guderian’s Duck’! The vehicle was based on the chassis and drive train of the Panzer IV tank, while the 7.5cm gun without a muzzle brake was mounted in a fixed superstructure. The 25.8-tonne vehicle was popular with its crews thanks to its potent armament, good mobility and low profile, especially in the defensive fighting that characterized the latter part of WWII. The Jagdpanzer IV L/70 saw combat on the Western and Eastern Fronts, with the greatest concentration of vehicles occurring in the Ardennes Offensive.

Like the original Jagdpanzer IV, Dragon’s 1/35 scale kit is based on the chassis of the Panzer IV. Considering the high quality of Dragon’s Panzer IV kits, this is a huge plus. The accurate components of chassis and running gear are combined with a new fighting compartment and engine deck to create this sleek tank destroyer. However, the front two road wheels have been newly tooled so as to represent the resilient road wheels that were used to bear the extra weight imposed by the larger gun and thicker frontal armor. To go with the running gear, brand new lightweight track links are included. The 7.5cm gun is fully represented, including the breech that can be seen through open hatches. The side skirts are innovatively produced in metal to enable a true-to-scale thickness. At the rear end of the vehicle, new exhaust pipes are finely produced by slide molds. This is a distinctive German armored vehicle of WWII, and Dragon’s 1/35 kit is outstanding in its own right!