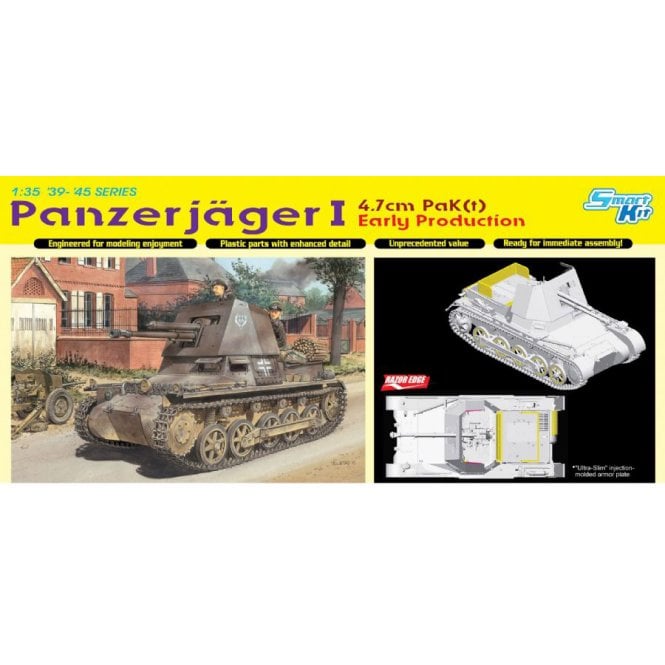 Code: D6258
Item in Stock Item out of Stock | Usually dispatched within 24 hours
Want it by Tuesday 7th June? Order within 9 days, 5 hours, 6 minutes and choose DPD Next Day at checkout.
Loading...

When WWII broke out in 1939, Germany relied heavily on the 3.7cm PaK 36 antitank gun. However, this puny weapon was no match for armored vehicles like the French Char B1 or British Matilda II. One solution was to mount the more powerful Skoda 4.7cm PaK(t) gun on the chassis of the Panzer I Ausf.B. This had a double advantage V a more capable antitank weapon was created, and it permitted an extended use of obsolete Panzer I tank chassis. Called the Panzerjager I, this new vehicle was Germany's first of many tank destroyer designs. Between March 1940 and February 1941, 202 such Panzerja"ger I vehicles were converted in time for service in the Battle of France, in North Africa, and in the invasion of Russia. By the end of 1943, the Panzerja"ger I had been phased out. The Skoda 4.7cm PaK(t) gun was mounted in an open-topped Panzer I fighting compartment with its original gun shield still affixed.

Dragon's latest 1/35 scale plastic kit shows an Early Production version of the Panzerja"ger I 4.7cm PaK(t). As such, the kit depicts a vehicle built by Alkett in 1940, characterized by a five-sided armored shield. The fighting compartment is created by Dragon using a brand new three-directional slide mold. Not only does this molding allow full detail, but it also incorporates Dragon's highly praised Razor Edge technology to induce a scale thickness to the armored shield. The engine deck has been correctly rearranged to reflect the configuration of an Early Production vehicle. Photo-etched parts are included for elements like the exhaust muffler cover, while the tank destroyer includes finely detailed parts from previously released Panzer I kits. The Panzerja"ger I also boasts a set of easy-to-assemble Magic Tracks. All in all, Dragon has supplied modelers with a much more effective tank destroyer for their next project!