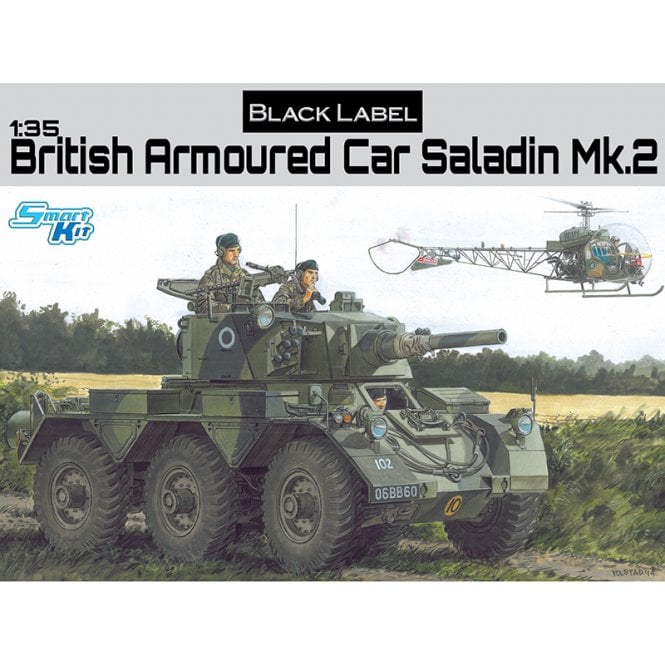 Code: D3554
Item in Stock Item out of Stock | Usually dispatched within 24 hours
Want it by Tuesday 7th June? Order within 9 days, 1 hours, 39 minutes and choose DPD Next Day at checkout.
Loading...

The FV601 Alvis Saladin was a British heavy armored car from the Cold War period. The first prototypes were built in 1953, and serial production was carried out in the period 1958-1972. A total of 1,177 examples of this vehicle were built. Alvis Saladin was powered by an engine Rolls-Royce B80 Mk.6A with 170 HP. It was armed with a single 75mm L5A1 gun and two 7.62mm L3 machine guns.

Alvis Saladin was created as the successor of the AEC Armored Car and Daimler Armored Car, which remember the times of World War II. Its design has improved its mobility compared to its predecessors by using a six-wheeled chassis, and a much more modern 75mm gun was used. In the course of operation, it also turned out that Saladin is great for desert conditions, which meant that many vehicles of this type went to the countries of the Middle East, including Yemen, Jordan, Lebanon and the United Arab Emirates. Alvis Saladin took part in several conflicts of the Cold War period, including the Six-Day War (1967), the War in Biafra (1967-1970) and the Civil War in Lebanon (1975-1990).