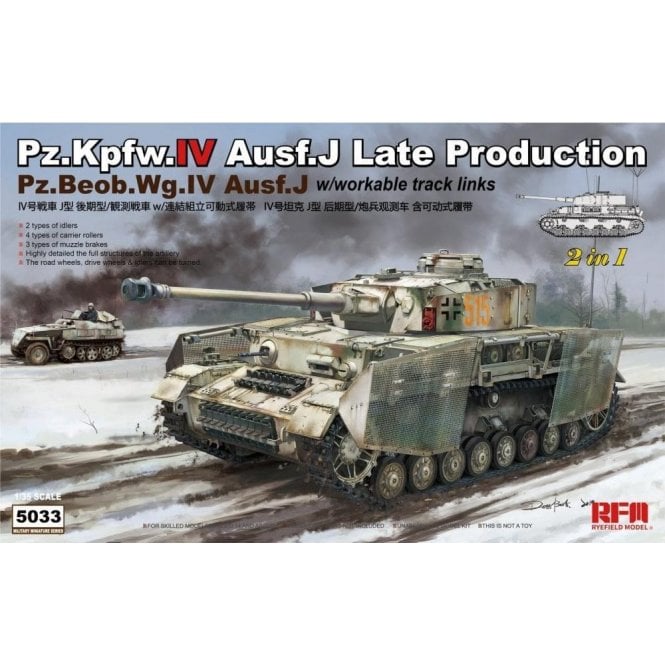 PzKpfw IV (Panzerkampfwagen IV) was a German medium tank from the Second World War. The first prototypes of the vehicle were created in 1936, and serial production continued in the period 1938-1945, ending with the production of about 8,600 vehicles. The D version of the tank was powered by a single Maybach HL 120 TRM engine with a capacity of 300 HP. It was armed with 1 75mm KwK 37 L / 24 gun and 2 7.92mm MG 34 machine guns.

The PzKpfw IV was created as a result of a competition announced at the end of 1934 by the German Armaments Department for a medium tank weighing up to 18 tons and armed with a 75 mm gun. The competition was won by the Krupp company, whose vehicle was put into mass production - as it turned out, it was a vehicle that can be safely called the "workhorse" of German armored forces during World War II and one of the most intensively developed and modernized Wehrmacht tanks. Numerous variants of the PzKpfw IV were created in the course of production. Chronologically, the first was the A version, armed with a 75mm short-barreled gun and a 230hp engine. However, versions B and C appeared quickly, in which several significant changes were made: first of all, more powerful engines (265 HP in version B and Maybach HL 120 TRM with 300 HP in C version - which were installed in PzKpfw IV until 1945 year), and the armor of the entire car was improved. The F1 and F2 versions turned out to be a real revolution, in which the frontal armor was increased to 60 mm, and the main armament was changed to the great, long-barreled 75mm KwK 40 L / 43 cannon, which in 1942 and 1943 allowed them to fight any Allied or soviet. The most frequently produced versions of the PzKpfw IV were the G, H and J versions, which were very similar to the F1 and F2 versions. The main armament has not changed significantly (it was still the KwK 40 cannon), as well as the engine and chassis. On the other hand, the armor was slightly strengthened, and from the beginning of 1943 armored screens (Schurzen) were installed on them. Numerous other vehicles were built on the chassis of the PzKpfw IV, such as the StuG IV assault gun, the Nashorn tank destroyer or the Wirbelwind self-propelled anti-aircraft gun. PzKpfw IV tanks were used on almost all fronts of World War II - from the September campaign in 1939, through the campaign in France in 1940, the Barbarossa and Typhoon operations in 1941, the Battle of Kursk in 1943, to the last operations of the German army against The USSR and the Western Allies in 1944-1945.