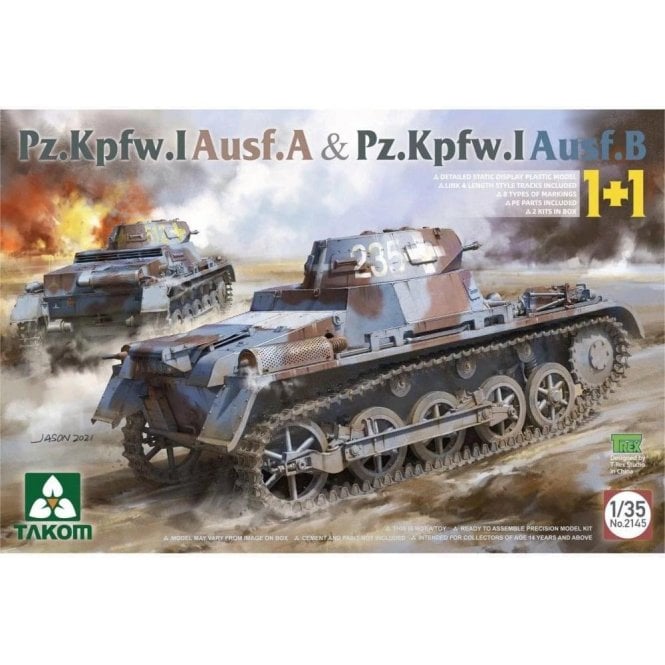 Code: TAK2145
Item in Stock Item out of Stock   |   Usually dispatched within 24 hours
Want it by Tuesday 31st January? Order within 2 days, 3 hours, 23 minutes and choose DPD Next Day at checkout.
Loading...

PzKpfw I (Panzerkampfwagen I) was a German light tank from the Second World War. The first prototypes of the vehicle were created in 1933, and serial production continued in the period 1934-1939, ending with the production of about 2,000 cars. The A version of the tank was powered by a single Krupp M305 57hp engine. Its main armament was two 7.92 mm MG 13 machine guns placed in the tower.

The first work on the PzKpfw I began in 1930, when the German Armaments Office, contrary to the provisions of the Treaty of Versailles, commissioned work on a tracked vehicle intended for reconnaissance and armament transport. The Krupp company very quickly took the lead in these works, following the British designs of the Vickers concern, but without access to English technologies. In 1933, the first tracked chassis were created, which were later used to train drivers, and the serial production started in 1934, when the Germans terminated the Versailles treaty. Two basic variants of the PzKpfw I were created: A and B. Version A was the first mass-produced version, while version B had a modernized suspension and chassis and a new engine - Maybach NL 38 TR. Other vehicles were also built on the chassis of this vehicle, e.g. the command vehicle (Panzerbefehlswagen I) or the Panzerjager I tank destroyer. PzKpfw I tanks were used during the civil war in Spain (1936-1939), in the September campaign, the campaign in Norway (1940 ), in France (1940), in the Balkans (1941) and - on a small scale - in the initial stage of the war with the Soviet Union (1941), already being completely obsolete vehicles at that time.