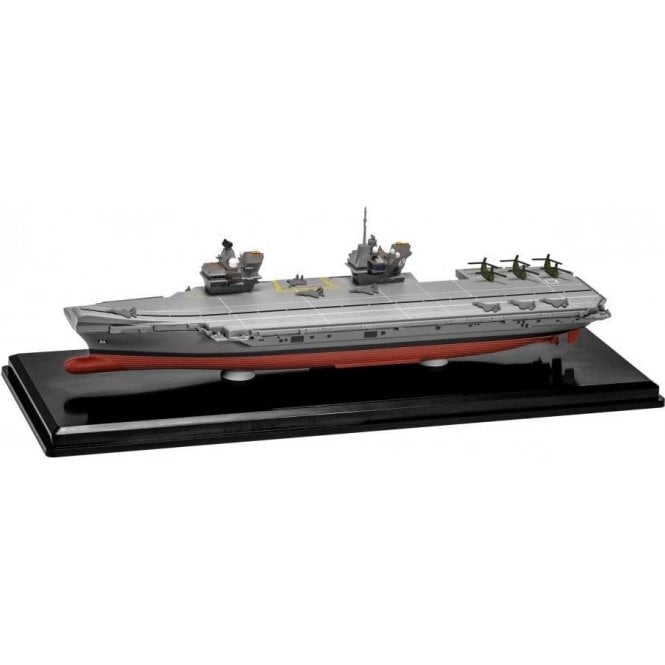 Code: CC75001-2
Item in Stock Item out of Stock | Usually dispatched within 24 hours
Want it by Tuesday 7th June? Order within 9 days, 2 hours, 26 minutes and choose DPD Next Day at checkout.
Loading...

Queen Elizabeth-class aircraft carriers are the largest and most advanced warships ever built for the royal navy. They will be known as the U.K’s flagships as they embark on many vital global deployments over the next 50 years.

HMS Queen Elizabeth has already been accepted to the fleet, while HMS Prince of Wales has just been commissioned. She is the largest and most powerful vessel ever constructed for the Royal Navy. This awe-inspiring warship can carry up to 40 aircraft.

As well as state-of-the-art weaponry and communications systems, HMS Queen Elizabeth boasts five gyms, a chapel and a medical centre. The flight deck of the HMS Queen Elizabeth comes in at an enormous four acres and will be used to launch the fearsome new F-35 Lightning II Joint Strike Fighter. Four of these awesome fighter jets can be moved from the hangar to the flight deck in just one minute. The ship’s two propellors weigh 33 tonnes each. The powerplant behind them generates enough power to run 1,000 family cars.

These carriers are 280 metres long, displace 65,000 tonnes in weight and have a top speed of over 25 knots. Carrying a crew of between 700 and 1,600 (when all 36 F-35s are on board, these mighty ships also will carry 4 Merlin Helicopters. Six U.K shipyards were involved in the construction and during this, 250,000 kilometres of electrical cable was installed on each one!