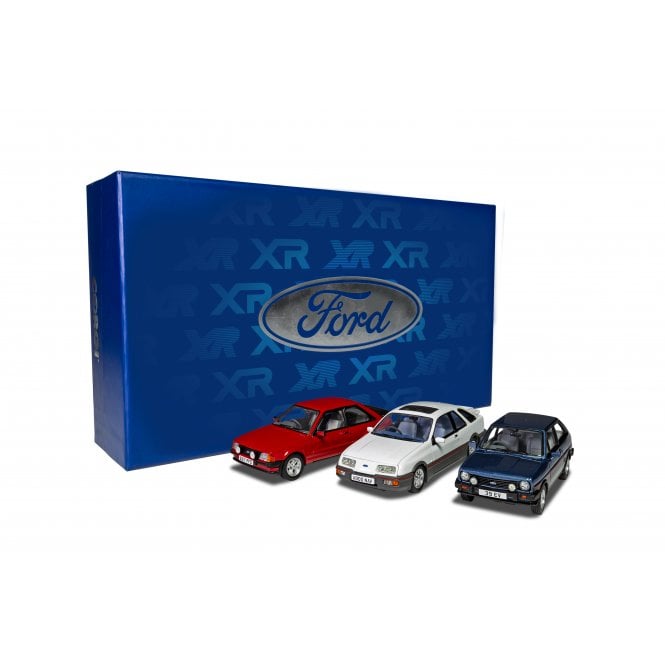 Code: VC01301
Item in Stock Item out of Stock   |   Usually dispatched within 24 hours
Want it by Wednesday 8th February? Order within 2 hours, 4 minutes and choose DPD Next Day at checkout.
Loading...

The eighties was the age of the hot hatch, and Ford of Europe entered this new market with typical panache creating a new aspirational sub-brand, XR, which was ushered in with great fanfare on the 1980 Escort XR3. The XR badge didn’t mean anything particularly but it caught the zeitgeist perfectly and sounded cool. The XR cars all looked fabulous, offered great performance and a cool up to the minute image but, crucially, were both attainable and comfortable enough to live with every day. This collection celebrates the era defining XR badge and contains one example of each of that iconic first XR range.

The XR3i modelled was first registered in November 1984 in Dudley, West Midlands. It was one of the first cars made in Rosso Red, a colour launched in September 1984 that remained popular until the Escort Mk3 ceased production in 1986. Little is known of the car’s early history but it was comprehensively restored by a previous owner in Yorkshire in around 2016 and remains in superb condition. It was purchased in April 2019 by West Midlands-based Simon Duffill, a fast Ford enthusiast who enjoys going to classic car events in his XR3i and credits the car with re-igniting his passion for fast Fords.

The XR2 modelled has been in the care of its current owner, North Yorkshire-based Andrew Evans, since January 1985. He bought the then two-year-old car to use every day and did so until replacing it with a newer XR2 Mk2 in 1993. He decided to keep the original XR2 however, which underwent minor works having the underside cleaned and refinished in body colour and both the front and rear suspension rebuilt. The wheels were also refinished, and the paintwork and decals were restored where needed. The XR2 has since only been used for classic car events and has now covered 89,000 miles in total.

The manual XR4i modelled was purchased by Suffolk-based Richard Pearson from R.C. Edmondson Ltd of Spalding, Lincolnshire, on August 25th, 1983. It was bought to be used as an everyday car and fulfilled this role for two years before a change in the owner’s working life meant he no longer needed to commute by car. He was very fond of the XR4i though and decided to keep the car in dry storage and use it occasionally when desired. As a result, this one owner car has only completed 23,000 miles and is considered to be one of the nicest original examples in the UK.