This site uses cookies to provide and improve your shopping experience. If you want to benefit from this improved service, please opt-in. Cookies Page.
Accept Cookies
Reject All Cookies
Manage Preferences
Due to strikes on the 24th & 25th November by Royal Mail Staff, No orders via Royal Mail will dispatched until Monday 28th November.
Standard Delivery £5.95
Next Day Delivery Available
Pre-Order - How Does It Work? 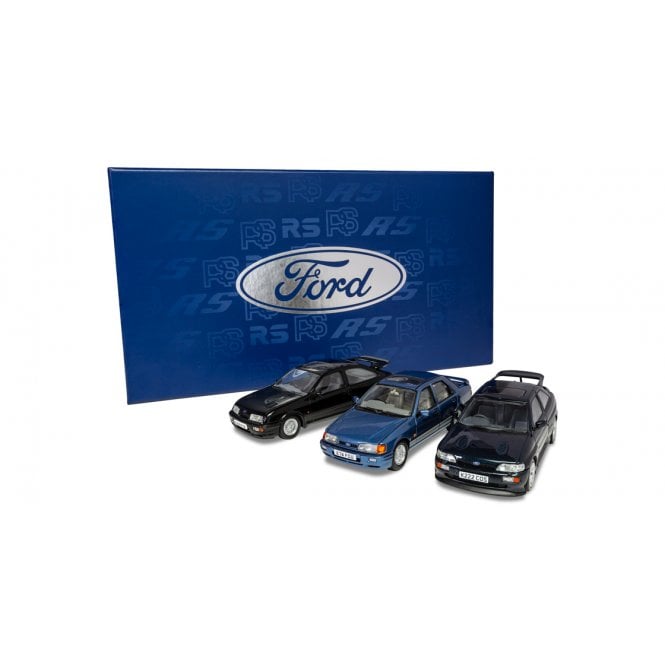 Ford RS Cosworth CollectionCosworth solidified its association with Ford on road cars by developing the YB series of engines. Starting with the Ford Sierra RSCosworth in 1986 with the famous in-line four producing 204 PS, this hugely successful engine destined for great things both onand off the track. This collection includes three of those famous cars, all very successful for both Ford and Cosworth which madeFord Cosworth a household name.Ford Sierra RS Cosworth Black Length 104mmBy 1980, ‘Ford Cosworth’ had become a household name. Their 3-litre V8 DFV engine had dominated F1, while the four-cylinder BDA had powered RS Escorts to globalrallying glory. They remained, however, two separate companies and Cosworth worked their powerful magic on engine projects for rival manufacturers. In 1983 StuartTurner returned to manage Ford’s competition Department and, aware the competition had overtaken Ford in motorsport, visited Cosworth with colleagues to discuss thefuture. Cosworth’s design genius, Keith Duckworth, ‘accidently’ left a prototype twin-cam 16V version of Ford’s SOHC T88 2-litre engine in a place where Ford executivescouldn’t help but see it.Ford Sierra Sapphire RS Cosworth Crystal Blue Length 104mmThe T88 16V twin-cam project had originally been developed as an aftermarket product of which Cosworth hoped to sell around 200 examples a year to enthusiaststo use in motorsport. Turner and his colleagues pounced on the idea though, and over a pub lunch formulated plans to add a turbocharger and take the 3-door SierraGroup A saloon car racing. The resultant Cosworth YB engine debuted in the 1985 Sierra Cosworth and transformed the small specialist Northamptonshire-based firminto major engine manufacturers. The company invested in a new bespoke factory in Wellingborough and by 1986 were producing over 5,000 engines a yearFord Escort RS Cosworth Mallard Green Length 113mmThe Sierra Cosworth was successful on track and in the show room; the initial 5,000 examples being sold out after an avalanche of effusive road tests by journalistssmitten by its outrageous performance and styling. Ford then civilised it by building the Sapphire 4-door saloon, a leather-lined ‘executive express’, that gained four-wheeldrive in 1990 and became the most capable saloon car in the world. Stuart Turner then suggested the platform and running gear of the 4x4 be fitted under the smallerMk5 Escort bodyshell and created the last chapter of the YB legend, the Escort Cosworth, which took Ford back to rallying glory