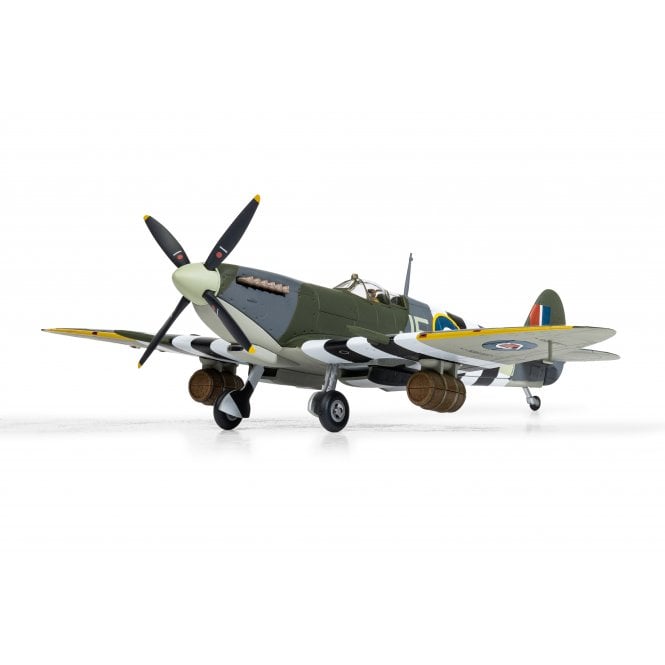 Code: AA29101
Item in Stock Item out of Stock   |   Usually dispatched within 24 hours
Want it by Tuesday 7th February? Order within 7 hours, 12 minutes and choose DPD Next Day at checkout.
Loading...

Wearing full D-Day identification markings, Spitfire MK329 JE-J 'Junior' was the personal mount of RAF ace pilot James Edgar 'Johnnie' Johnson, one of the RAF's top scoring fighter aces of WWII and one who's impressive tally of 34 confirmed aerial victories was scored exclusively against Luftwaffe single engined fighters. Flying extensively in support of the D-Day landings, Johnson and the squadrons under his command would be employed in aggressively clearing the skies of northern France of Luftwaffe fighter opposition, something they proved rather effective at doing. In fact, by D-Day, Johnson was one of the most successful Allied air aces still flying operationally, with his victories showing no sign of abating. Johnson and his No.127 (RCAF) Wing were one of the first fighter units to be sent to operate from forward landing bases in France following the successful Normandy landings, which is where the unusual story of this particular aircraft comes from. It appears that Spitfire Mk.IX MK329 was something of a hybrid machine and not the one Johnson actually flew in combat, but more of a hack airframe.

It is reputed that once his unit had been sent to operate in France, he used this Spitfire to fly back to the UK on unofficial 'Beer Runs', returning to their temporary home with two beer kegs attached under the wing of his aircraft. This practice was frowned upon by the RAF top brass, so units came up with ingenious ways around the restrictions, using standard external fuel tanks which had been thoroughly washed out for the purpose of transporting their beer, however, despite their very best endeavours, the beer still had a nasty aftertaste of fuel. It is thought that as Johnson was particularly highly regarded by both his men and his superiors, a blind eye may have been turned on his unofficial Spitfire sorties and the refreshing ordnance they ferried. There are few details regarding the actual production and service career of Spitfire MK329 in existence, which Johnson described in his memoirs as being a collection of components from various different Spitfires, something of a mix and match airframe. This is borne out by the fact that its serial MK329 is very similar to that of his usual and favoured combat mount around that time, Spitfire MK392 - is this the reason why he referred to this aircraft as 'Junior'? Whatever the true story, this beautiful Spitfire and its unusual underslung load makes for a fitting first release for our new Spitfire Mk.IX tooling.