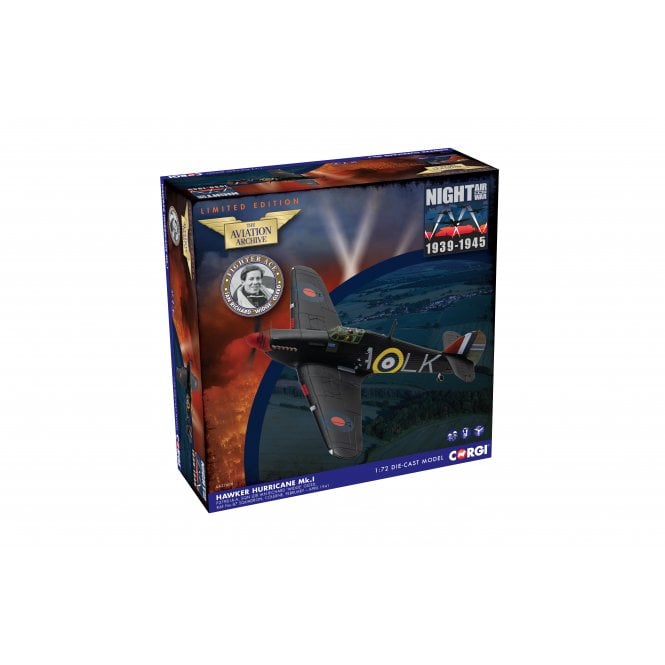 Code: AA27608
Item in Stock Item out of Stock   |   Usually dispatched within 24 hours
Want it by Monday 10th October? Order within 19 minutes and choose DPD Next Day at checkout.
Loading...

When the Hawker Hurricane entered squadron service at the end of December 1937, it heralded a new era of aviation for a Royal Air Force which could now boast the introduction of their first high speed monoplane fighter. From a design perspective, the Hurricane was more evolutionary than revolutionary, taking many of its design characteristic from the successful series of sleek Hawker biplanes which preceded it - in fact, the new fighter was initially referred to as the ‘Fury Monoplane’ project. A clever combination of traditional design and manufacturing techniques, whilst at the same time introducing many ‘firsts’ for a British monoplane, such as an enclosed cockpit, retractable undercarriage and the adoption of eight machine gun armament, the Hurricane could be described as the right British aeroplane at the right time. In the days when speed was the main attribute required in securing superiority of the skies, the Hurricane was the first RAF fighter to exceed 300 mph in level flight, which at that time represented an incredible 100 mph increase over existing biplane fighters already in service.An extremely rugged aeroplane the traditional manufacturing techniques adopted by Hawker designers meant that the Hurricane was less complicated and much cheaper to produce than the revolutionary Spitfire which followed it into service and perhaps of even greater importance, it was easier to repair having sustained combat damage - these aircraft needed to be in the air fighting, not in a hangar being patched up. Despite the Spitfire taking the reputation of being Britain’s saviour during the Battle of Britain, the competent and dependable Hurricane actually accounted for 2/3rds of the RAF’s aerial victories claimed during the Battle of Britain, a fact which arguably makes the Hawker Hurricane the most important aircraft in British aviation history. Having proved instrumental in defeating the Luftwaffe by day during the summer of 1940, the Hurricane was also called upon to challenge them by night as they moved to a nocturnal bombing campaign following their defeat in the Battle of Britain.Having already gained his pilot’s licence as a civilian, Ian Richard Gleed successfully applied for an RAF commission in 1936 and on completion of his training, was posted to No.46 Squadron at Kenley, to fly Gloster Gauntlet fighters. Later transferring to No.266 Squadron as a Flight Commander, Gleed was fortunate to survive an incident in early 1940 when the Spitfire in which he was flying broke up in mid-air and whilst he was able to get out of the aircraft safely, the incident did result in him requiring a period of hospitalisation. On his return to flying duties, Gleed was posted to No.87 Squadron, who were flying Hawker Hurricane fighters and quickly sent to France as part of the Royal Air Force component of the British Expeditionary Force. He would immediately make his mark on the fighting, not only showing great courage in the face of the enemy, but also taking a heavy toll of Luftwaffe aircraft in the process. It is thought that Flt. Lt. Gleed achieved ‘Ace’ status quicker than any other RAF pilot in WWII, taking just two days to dispatch 2 Bf 110s, a Bf 109 and two Do17 bombers, with several other aircraft either shared or claimed ‘probables’ during the same period. Despite this, the inexorable advance of the Germans could not be stopped and the Hurricanes of No.87 Squadron would soon be forced to return to England.Once back in Britain, No.87 Squadron were initially stationed at Church Fenton in Yorkshire, but soon made the move south to Exeter. Unusually, the Squadron refused the opportunity to trade their Hurricanes for new Spitfires, as it was reported that Gleed and fellow pilot Roland Beamont were easily able to out-manoeuvre Spitfires during mock dogfight trials. Seeing service throughout the Battle of Britain, once the Luftwaffe’s raids moved to night bombing attacks, No.87 Squadron were given the task of providing nightfighter protection for Bristol and whilst this force was still very much in its infancy, Gleed was able to add a further two Luftwaffe aircraft to his growing victory tally.Perhaps one of the most famous Hurricanes of the entire Battle of Britain period, Ian Gleed’s Hurricane P2798 was the subject of several famous wartime photographs, ones which show the aircraft in several different presentations. Featuring a distinctive red spinner and unusual red painted area on the engine cowling behind the spinner, the aircraft also sports unique ‘Figaro the Cat’ artwork on the starboard side of the fuselage, under the cockpit – he appears to be enthusiastically destroying a swastika. Once transferred to night operations, the standard day camouflage of this aircraft was almost completely overpainted in black, except for the rudder and Gleed’s personal markings, which retained the camouflage sections on which they were originally painted, including the area under ‘Figaro’ the cat.