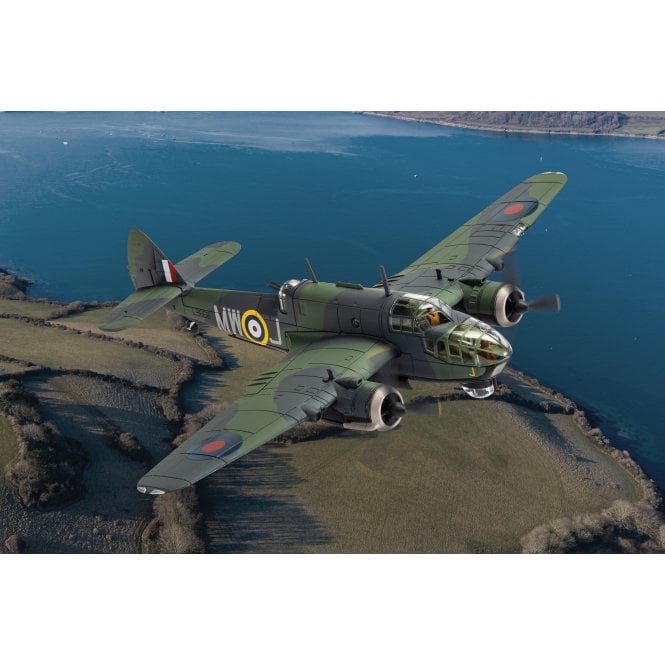 Code: AA28902
Item in Stock Item out of Stock   |   Usually dispatched within 24 hours
Want it by Wednesday 8th February? Order within 4 hours, 2 minutes and choose DPD Next Day at checkout.
Loading...

Bristol Beaufort Mk.I L9866, RAF No.217 Squadron, St Eval, Cornwall, Attack against German Cruiser Admiral Hipper, 1st February 1941. As arguably Britain's most capable maritime strike aircraft, the Bristol Beaufort was charged with carrying a heavy burden during the early years of the war, particularly when the RAF were engaged in targeting German surface raiders putting into port at Brest for repair and replenishment. Having already taken a heavy toll of Allied shipping during a previous Atlantic patrol, the mighty Admiral Hipper had successfully completed a period of repair in Brest and was almost ready to return to sea once more by the end of January 1941, something the RAF could not allow.

Charged with the task of stopping her, several Beaufort torpedo bombers of No.217 Squadron were dispatched from RAF St. Eval in Cornwall just before 15:00 hrs on 1st February 1941, a force which included L9866/MW-J under the command of Sgt John Bell Rutherford. Setting a course for Brest Harbour, the Beaufort crews knew they were headed for one of the most heavily defended locations in Europe, but worse than this, they also knew that as the German ship was about to come under steam, enemy defences would be expecting a visit from the RAF and would be ready for them.

If the British bombers were to successfully press home their attack, they would need much more than just flying skill to survive this withering German defensive onslaught, in addition to the unwanted attentions of the Luftwaffe before and after making their strike run.