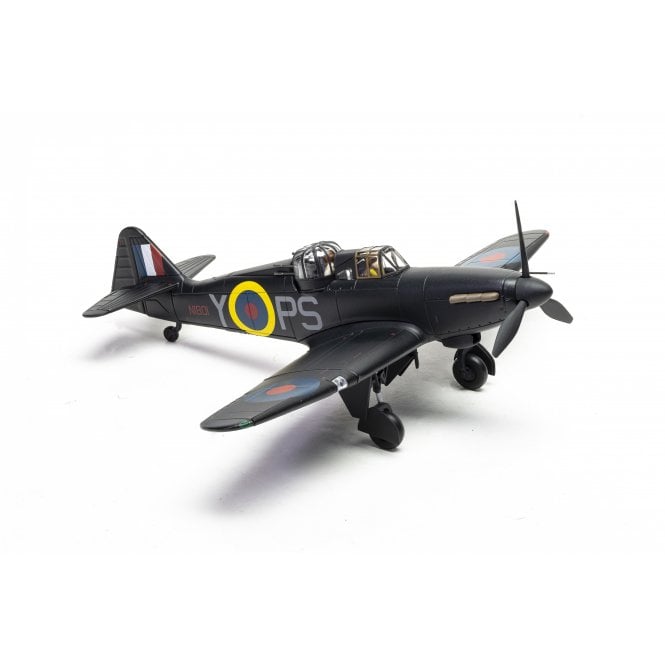 Code: AA39306
Item in Stock Item out of Stock   |   Usually dispatched within 24 hours
Want it by Thursday 9th February? Order within 19 hours, 55 minutes and choose DPD Next Day at checkout.
Loading...

Although the Boulton Paul Defiant fought alongside Spitfires and Hurricanes during the air battles above the Dunkirk evacuation beaches and the Battle of Britain which followed, it enjoys nothing of the widespread public recognition its two contemporaries could boast. Surprisingly, the Defiant actually made its first flight and RAF squadron introduction quite some time after both the Hurricane and Spitfire, something which may explain its limited success when used in the day fighter role during WWII. The idea behind the Defiant’s unusual design came from inter-war thinking that future air combat would be fought by fast, heavily armed bomber formations, which would not need the protection of dedicated fighter cover.In order to combat this, the Defiant, equipped with its quad dorsal turret mounted machine gun armament, could engage these bombers with a beam attack, similar to how battleships might engage, or from below, where the bomber was most vulnerable and where the fighter could concentrate the firepower of its four .303 in Browning machine guns. This same thinking also dictated that this new bomber defence fighter would not need forward firing armament, as the high closing speed of modern monoplane fighters would render frontal attacks useless, so the Defiant incredibly ended up being a fighter aircraft with no forward firing armament at all.Having a similar profile to the Hawker Hurricane which preceded it into service, the Defiant initially scored some significant combat successes against Luftwaffe aircraft, even the much vaunted Messerschmitt Bf 109 fighter. Attacking the Defiant as they would a Hurricane, Messerschmitt pilots soon realised their mistake, as they lined up to press home their flank attacks, only to be met by a hail of bullets. The shock of this misidentification was soon relayed to other pilots and the Defiant would soon become easy prey for the highly manoeuvrable Messerschmitts, which would attack the turret fighter from the front or from below, where the British aircraft simply could not defend itself.Withdrawn from the day fighter role during the Battle of Britain, the Defiant would go on to prove itself a more than capable nightfighter, where its crews helped to establish Britain’s fledgling nightfighter force, claiming many Luftwaffe victims in the process. Nocturnal Defiants were later equipped with airborne interception radar equipment to increase their effectiveness and later still, used to carry powerful electronic countermeasures equipment, as the air war took something of a clandestine turn. Ultimately though, continued development of the Luftwaffe’s bomber force saw the Defiant becoming increasingly ineffective, with the type finally being withdrawn to secondary roles from 1942 onwards. Despite this, the Boulton Paul Defiant definitely remains one of the more interesting aircraft of the Second World War.For a crew to attain the coveted status of air ‘Ace’ whilst operating the Boulton Paul Defiant turret fighter, they must have been an incredibly cohesive team, something which Flying Officer Frederick Desmond ‘Hawkeye’ Hughes and his gunner Sergeant F Gash most definitely were. During the height of the Battle of Britain, the pair claimed two Dornier Do17 bombers destroyed during the same sortie, however, these would prove to be their only successes during daylight operations. With the Defiant becoming increasingly vulnerable to enemy fighter attack, the type was transferred to night defence duties, where it was to prove much more successful. Searching for targets in the dark, an extra pair of eyes and the flexible firing positions afforded by the powered turret soon began to pay dividends, as German night raiders were intercepted and destroyed with increasing regularity.Boulton Paul Defiant N1801 was the first aircraft specifically allocated to pilot Desmond Hughes and as such, he was allowed to embellish it with his own personal markings. A son of the small coastal town of Donaghadee in County Down, Northern Ireland, Hughes painted the Red Hand of Ulster in a white shield on his aircraft’s port-side engine cowling, which also sported five victory markings painted under the canopy. As one of the five RAF squadrons funded by India’s Madras Presidency, N1801 proudly marked this association by also carrying the name ‘Coimbatore II’ on the engine cowling, making this a highly distinctive nightfighter. From the memoirs of Desmond Hughes, he describes how he used this aircraft until the squadron upgraded to the more powerful Defiant Mk.II, but how N1801 was extremely reliable, with its Merlin engine never so much as coughing at him during operation.Frederick Desmond Hughes would go on to post further success in the night air war flying Beaufighters and Mosquitos, eventually ending the war as one of the RAF’s most decorated airmen and able to boast a victory tally of 18.5 enemy aircraft destroyed. Adding further interest to the exploits of this exceptional airman, another story associated with Hughes is that he was one of the first WWII airmen to take his pet dog on an operational sortie with him. His beloved mongrel ‘Scruffy’ was dressed in flying overalls for warmth during his unusual trip and is thought to have enjoyed at least one night sortie in an RAF Beaufighter.