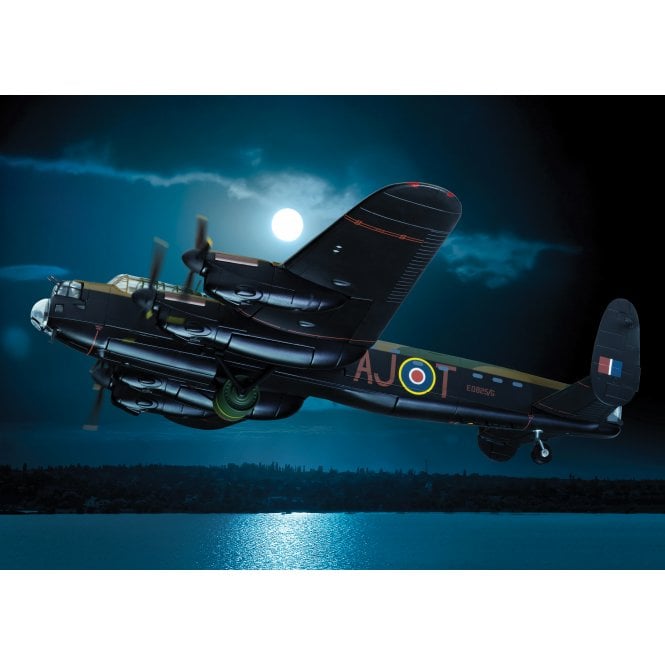 Code: AA32628
Item in Stock Item out of Stock   |   Usually dispatched within 24 hours
Want it by Wednesday 8th February? Order within 2 hours and choose DPD Next Day at checkout.
Loading...

With the crews of the newly formed RAF No.617 Squadron now briefed on the targets they were being sent to attack, raid preparations for American pilot Flt Lt Joe McCarthy and his crew could hardly have been more challenging. Having practiced exhaustively in their usual aircraft ED915/AJ-Q 'Queenie', the crew discovered their Lancaster had developed a technical problem in the seconds immediately prior to taking off for 'Operation Chastise', the audacious RAF raid against the mighty dams of the Ruhr Valley. The issue was serious enough to force the crew to abandon their aircraft and transfer to reserve Lancaster ED825/G AJ-T 'Tommy' just minutes before they were due to take off. Their new aircraft eventually left Scampton at 22.01 hrs bound for arguably the most difficult target of the entire raid, the Sorpe Dam, which was protected by a huge earth bank. Having practiced attacking targets flying low, straight and level towards them, they would instead have to drop their 'Upkeep' mine in a completely different manner. Flying low over the German village of Langscheid, they would have to avoid the tall steeple of the village church on the run-in, before diving steeply to extremely low altitude to fly along the length of the dam wall, dropping the non-spinning 'Upkeep' mine at exactly the halfway point. This attack approach proved so difficult that the aircraft's bomb aimer George Leonard 'Johnny' Johnson could not release the mine on nine previous attack runs, however on the tenth and whilst flying at a little over 30 feet, the Lancaster was perfectly aligned. Johnson shouted, 'Bomb gone!' over the intercom, much to the relief of the aircraft's crew, with the mine exploding exactly where intended, creating a huge crack in the structure. Unfortunately for them, the huge earth bank which supported the Sorpe Dam held firm, but would require extensive repair works to be undertaken in the weeks which followed the raid.

Lancaster ED825 arrived safely back at RAF Scampton at approximately 03.30 in the morning of 17th May 1943, where the crew would learn that whilst the raid had been a success, the men of No.617 Squadron had paid a terrible price. Of the 19 Lancasters which had left the airfield only hours earlier, eight aircraft and their crews had failed to return. The bomb aimer onboard Lancaster ED825/G AJ-T 'Tommy' during its attack against the Sorpe Dam and the man with the responsibility for releasing the aircraft's 'Upkeep' mine was George Leonard 'Johnny' Johnson. Unless the aircraft was in the optimum position to deliver the mine on target, Johnson would not release the weapon, telling the pilot to go around and have another run at it. On that fateful night, it would take ten attack runs before he was happy to release the mine and allow the pilot to set course for home and their place in the history books.

At the age of 101, George Leonard 'Johnny' Johnson was the last surviving airman from the Dambusters raid, but sadly joined the rest of his comrades in early December last year. All 133 of the Dambusters heroes are now reunited once more.