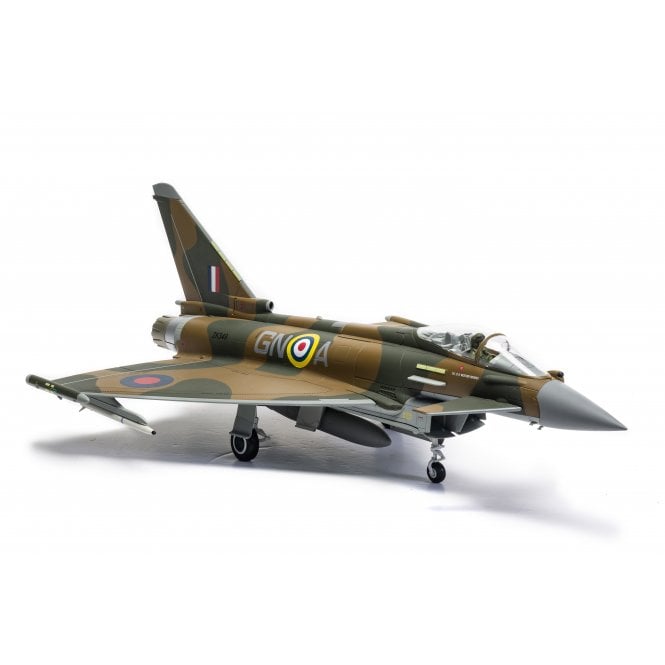 ZK349 GN-A, Flt. Lt. Ben Westoby-Brooks, RAF No.29(R) Squadron, Battle of Britain 75th Anniversary commemorative scheme, Typhoon Display Team, RAF Coningsby, Lincolnshire, Summer 2015 As Britain prepared to mark the 75th Anniversary of the Battle of Britain in the early summer of 2015, the RAF were determined that their tribute would be a particularly impressive one. Under a cloak of relative secrecy, but soon to delight aviation enthusiasts everywhere, Eurofighter Typhoon FGR.4 ZK349 emerged from Coningsby’s paint shops wearing very different markings to the standard grey scheme worn by Britain’s current air superiority fighter. Looking completely different to any other Typhoon on the Coningsby ramp, this commemorative tribute aircraft was finished in a representation of a 1940 Fighter Command Battle of Britain scheme and RAF officials proudly announced that it would also be performing a synchro pair display routine with one of the BBMF’s Spitfires at several Airshows that summer.

The markings were a representation of the scheme worn by Hawker Hurricane Mk.I P3576 of No.249 Squadron, the mount of Flight Lieutenant James Brindley Nicolson on 16th August 1940, the day on which he would be awarded Fighter Command’s only Victoria Cross of the Second World War. Wearing the same GN-A fuselage codes as Nicholson’s Hurricane and displaying his personal ‘Red Devil’ emblem under the cockpit canopy, this Typhoon immediately became something of an Airshow phenomenon and was simply referred to as ‘GINA’ by Britain’s army of besotted enthusiasts. Doing much for RAF public relations and recruitment numbers, this beautiful Typhoon definitely became the most popular individual RAF aircraft of the modern era. Since stories of the air battles of the First World War began to captivate the British public, fighter pilots and the nation’s latest front line fighter aircraft have been a source of constant fascination and the main reason why so many young people dreamt about a career serving in the Royal Air Force. Over the past century, aircraft types such as the Sopwith Camel, Supermarine Spitfire and English Electric Lightning have not only protected the nation from potentially hostile air incursions, but also represented the most exciting machines produced by the British aviation industry, aircraft that anybody would love to have the opportunity fly.